Syros is located almost in the center of the Cyclades, 83 nautical miles from Piraeus and 62 nautical miles from Rafina with an area of 101,900 acres. The trip by ferry takes about four hours, while modern high-speed takes less than thrice hours.It is surrounded by the eastern islands of Andros, Tinos, Mykonos, Naxos, Paros, west of Sifnos, Serifos, Kythnos, Kea and the north Giaros.From the hill of Ano Syros can see all these islands and you will immediately understand why Syros became an administrative, commercial, intellectual and cultural center of the Cyclades. 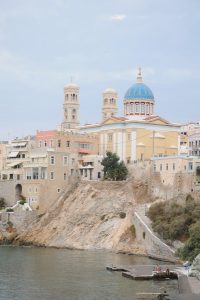 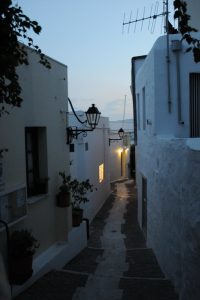 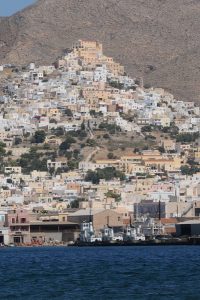 It has a population of about 20 000 inhabitants, Orthodox and Catholics, and its capital is Ermoupolis “The Lady of the Aegean” built in the hills surrounding the harbor. Charms immediately striking architecture is perhaps the only classic city left in Greece.An architecture that tells the history of Syros starting from very ancient times and concludes today. A masterful mix of old and new, classic and modern.

The northern part of the island called Ano Meria is mountainous and the southern part is flat at most settlements, villages and beaches of Syros.The Ano Mera, in the picturesque and calm, ideal for exploring the streets and trails while it is little but lead through a stunning landscape with rocks, caves, bridges impassable in the pristine beaches.Unlike the southern part of the Syrian road is excellent with paved roads connecting all the villages and the Ermoupoli. The settlements here are well developed tourism, with modern hotel facilities and sandy beaches.